Lincoln Artists' Network have been developing a project for some time working with Apparatjik.

Informatings:
Everybody is an Apparatjik. 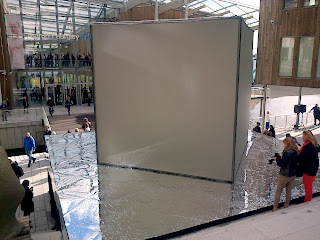 The EyeOn Committee have announced that other bands (and presumably artists) can create similar Light Space Modulator devices in other locations.

The proposal is to create and construct an LAN LSM in which to exhibit works by local artists invited to contribute to an experimental LAN project.

Lincoln Artists' Network invite artists, animators, photographers, illustrators, etc to submit work in response to the mysterious Outer Trial Bank and The Wash Incident, where I was born in 1976.

LAN:LAB invites you to start your career in a parallel universe and work your way multidimensionally.

Lincoln Artists' Network hereby invites you to participate in The Outer Trial Bank / The Wash Incident to be exhibited at Norman St. Empty Shop Space in Sept - Oct 2013.

if selected by the LAN:LAB committee, your contribution will be shown alongside works of the others invited, and presented as a slide-show with multiple pixels projected on the apparatjik light space modulator. each image will randomly change place on the cube, thus creating unintended intersticesartists whose works are used will be credited with full name and the letter ‘A’ behind it, on lincolnartistnetwork.co.uk.  and subsequent exhibitions is credited in all LAN publication in the same way.
for technical reasons all slides will be cropped to perfect squares. please send us a cropped image or accept that LAN:LAB crops your work without any restrictions.

upload and sideload masterpieceings at the following contact.lincolnartistnetwork@gmail.com with the email subject "Outer Trial Bank"

LAN
The Lincoln Artists' Network was set up in January 2009, as a network for graduates and undergraduates of Lincoln University, established artists that base their practice in and around Lincoln and Lincolnshire, businesses that are interested in investing in the creative industries, to create and facilitate a community that will benefit everyone involved. Initially this currently consists of a Facebook group and occasional planning meetings, which we hope will extend to incorporate several ventures, for the benefit of existing graduates and future students, to engage with the wider local community and continue to practice as local based artists. The LAN wishes to develop links within the wider East Midlands arts community, nationally and internationally. Lincoln Artist’s Network currently has over 100 members, teachers from local Lincoln schools and other creative professionals, students and graduates based in Lincoln.